This week! The Outreach Committee will lead worship (Sunday, May 16 at 11 am, by Zoom). Our guest speaker will be our very own Mary Louise Ashbourne, who will speak about conservation and heritage, with special attention to the Humber.

Save the date! The Church School picnic has gone virtual! We’re planning a Zoom picnic on Sunday, June 13. More details to follow.

Your Church Council Executive will meet this Sunday (May 16) at 12.30 pm by Zoom.

Zoom worship continues! Join us this Sunday (May 16) beginning at 11 am. You will still receive the now traditional 8 am service by email. However, you can now watch a live version of the same service on your computer or device, followed by a time of fellowship. Like this past Sunday, you will be greeted by a host as you arrive (we recommend five or so minutes early) and have the opportunity to remain on the call for “coffee time” after the service.

Will all Zoom invitations, there is an option to join by telephone. Here are some instructions:

1. To join by phone, choose a local number from the “Dial by your location” section of the Zoom invitation.
2. Dial one of the 647 numbers and key in the Meeting ID when prompted, followed by the # key.
3. Ignore the request for a Participant ID and press # again.
4. Add the meeting Passcode and press # (once in the meeting, press *6 to mute and unmute)

Thanks to our Zoom hosts (Faith, Kathy, Joyce, and Kerri) as well as Jenny and Heather for making our weekly worship by Zoom possible.

The Church Council Executive continues to monitor the financial picture at Central. PAR is a blessing for us, along with those who have mailed in their offering or made a contribution online. We encourage you to help in any way you can, and we will even send someone to pick up your donation if you can’t get out to the mailbox. We thank you for your continued support. The mailing address is 1 King Street, Weston, Ontario, M9N 1K8 or you can give to Central online with CanadaHelps.

Worship is currently online only. If you receive this blast, you will also receive an online service, around 8 am on Sunday. The email will include a link to the 11 am service by Zoom.

Psalm 1: “He is like a tree planted by streams of water that yields its fruit in its season, and its leaf does not wither.”

Read last week’s sermon. Did you miss a service, or misplace the link? Our services remain online for you to review and enjoy. Click oneking.ca/wp to visit our worship site.

Some background information, prepared by Barbara Bisgrove, with the title “Canada is Home to One-fifth of the World’s Fresh Water.”

While Canadians have the world’s third largest freshwater reserves, we can no longer be complacent about its safety. As global temperatures continue to rise, our glaciers and ice cover melt, river flows are unpredictable, and algae contaminates lake water. Scientists suggest all this is speeding up as shown by more frequent damage from floods, droughts and wildfires.

In recent decades, the quality of drinking water supplies in rural and Indigenous communities has degraded, leading to more than 100 drinking water advisories for reserves as of 2015. These forcing some of the 2,300 separate First Nations reserves to boil water, pay for water delivery or haul it from a water filling station. Some advisories last longer than a year. Imagine your water infected with fecal matter, sewers backing up into bathtubs or only bathing once a week because of water shortages – that is if you have running water and indoor plumbing.

An advisory may include information about preparing food, drinks, or ice; dishwashing; and hygiene, such as brushing teeth and bathing. Boil water advisories usually include how to boil the water and “Use bottled or boiled water for drinking, and to prepare and cook food.” Even pets need boiled water.

Last year, more than 250 members of the Neskantaga First Nation were evacuated to Thunder Bay after an oily sheen was found on their reservoir. The discovery left the community, located in northern Ontario, without access to running water. Evacuations separate families and friends and disrupt lives. Neskantaga has been living under a boil-water advisory for 26 years. Excessive water boiling leads to mould that deteriorates housing, causing overcrowding. Overcrowding and lack of running water contribute to the contraction of methicillin-resistant Staphylococcus aureus bacteria (MRSA), the main antibiotic-resistant infection that disproportionately affects Indigenous people.

Successful communities have invested heavily in monitoring and cellphone technology. It can take weeks from contamination suspicion, water testing by a distant lab to the results being returned to communities for action to be taken. The government subsidizes the salaries of locally engaged operators but needs a skilled labor force available on reserve as well as drinking water systems that available operators can manage successfully.

Seventy-three percent of on-reserve water systems are listed as high or medium risk, meaning the community does not have the local resources to fix standard system problems. When the funding runs out so will the subsidies. Decades of underfunding by the government on other public services like road and sewage lines and the proximity of many reservations to mining facilities put water systems at increased risk of contamination. It seems to be a problem where solutions need to be coordinated with the various agencies involved and that will take time. 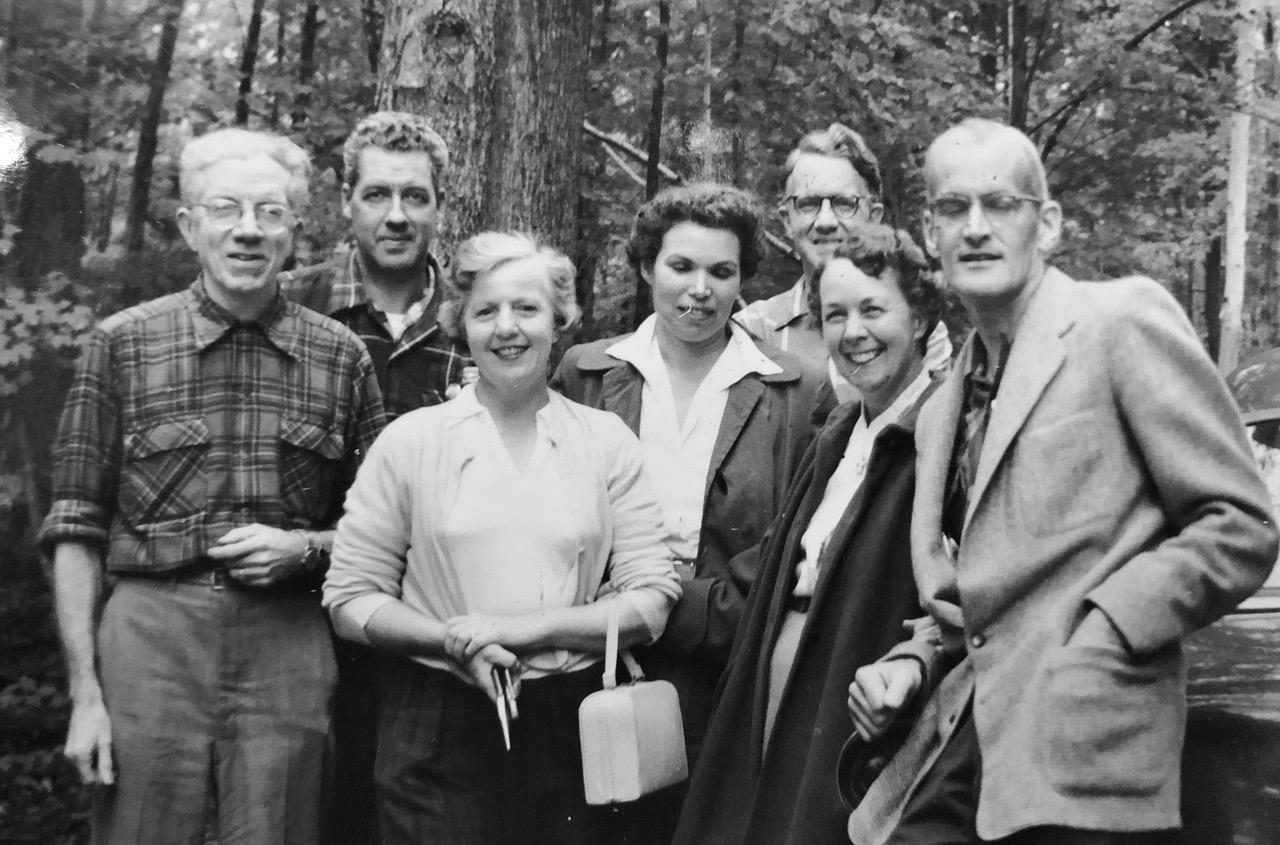 Part of our celebration is to catalog the history of Central and the congregations woven into our fabric. Earlier this year, Marlene, Sylvia, Kerri, and Kevin assisted in transcribing and digitizing our existing history books, from 1971 and 1996. This excerpt is found in the book “From Methodist Episcopal and Wesleyan Methodist to Central United” (1971) by Stanley Musselwhite:

This congregation has contributed its full share of members who have served the community as members of Council, Reeves and Mayors, York County Wardens, members of the local Board of education, Red Cross Society, Service Clubs and many other organizations. While complete records of those who have held public office in Weston are published elsewhere (in “The History of Weston: by Cruickshank-Nason, for example) the following notes are of interest to this congregation as the individuals referred to were affiliated with this church.

When Weston became a village, the first council meeting on January 16th. 1882, included Wm. Tyrrell, Reeve, and Jacob Bull and David Rowntree as Councillors. Weston became a Town in 1915, and its first Mayor was Dr.W.J.Charlton who served for five successive years. During the next 46 years until Weston became part of the Borough of York, the following gentlemen served for varying periods of one to three years as Mayor: G.A. Sainsbury, A.L. Coulter, W.J. Pollett, S.J. Totten, F.W. Mertens, K.L., Thompson and J.L. Holley.

Many active members of the congregation served the community in the field of education: Mr. A.L. Campbell, one time High School Principal and Public School Inspector; and Messrs. A. W. Pearson, E.,H.G. Worden and C.W. Christie, all occupied the post of Principal of Weston High School, later known as Weston Collegiate and Vocational Institute. The latter two named served for some years each as Secretary of the Official Board of the Church. Mr. J.R.H. (Archie) Morgan who occupied many important educational posts prior to his recent retirement (and received an honourary degree of Doctor of Law from the University of Toronto) is currently Chairman of our Christian Education Committee.

An Element of Truth

Barbara Bisgrove has graciously allowed us to share excepts of her publication “An Element of Truth: Stories Based on What Was Heard and Learned at the Drop-in.” In this section, Barbara shares the story of “Pete”

“Pete,” as he now called himself, came from a French-Canadian community in northern Québec near the Labrador border. There he was known as “Pierre.” There were long, dark winters followed short summers, and larders, stocked by fishing and hunting. In those days, he was a young community leader, with a business plan for funding the construction of a community hall where people could gather – the older adults could smoke their pipes, click their knitting needles, or bend dried reeds into basket shapes. He wanted a place where young people could play ball hockey, hold dances, and host weekly Bingo games. He wanted to build a community centre that would bring people together. He could picture a place where young people could learn traditional skills and become self-sufficient. The elders could share their knowledge. They needed a community building to discuss policing matters, especially drunkenness and unemployment. There were increasing numbers of suicides happening and the caused need to be addresses by the community.

Oh, how excited he was about that business plan. He would go to the Council meetings and hold it up as he spoke quickly and passionately about what it could mean to build such a place and how the community would benefit. Those were good days. He worked in construction, had a supportive wife and two lively children. His brain overflowed with ideas. But it did not last. One wet day, he slipped and fell from a rooftop, landing with a painful crash into concrete blocks stacked and ready for the foundations. At that same moment, his hopes and dreams for the future crashed down around him. One doctor and a nursing assistant were the only professionals available to attend to medical emergencies. So, his scrapes, bruises, strained back muscles and dislocated rotary cuff were treated locally – not considered bad enough for transport south to better equipped medical facilities – and he was sent home to heal with a bottle of pain killers.

Members and friends receive this blast every Thursday. To share an announcement or unsubscribe, email cuc@bellnet.ca

Our location on the historic Carrying Place Trail (Weston Road) reminds us that we meet on the traditional territory of the Huron-Wendat, Petun, Seneca and, most recently, the Mississaugas of the Credit. We hope this ancient path will be a symbol of our desire to walk with Indigenous peoples in a spirit of reconciliation and respect.

View all posts by admin